If you have lived in China you will understand the true meaning of "Independent Publisher"... There is none!
Then how is it I can claim to be one?
And that is a Question that Trax2 Maps have been asked many times over...

Then SARS happened in the beginning of 2003. Tourism and Travel stopped completely over night in China. China turned into one big "Ghost Town". Everyone stayed inside, train and bus stations were completely devoid of people, trains and buses still ran but ran empty; outside, streets were deserted, markets lay empty.
New laws came into effect forbidding people to leave their own province, road blocks were everywhere - not that anyone wanted to go out anyway - and so the whole of China stopped dead. Over 1.3 billion people and no one out, can you imagine ... anyway ...

As the weeks passed, business that had been in anyway connected to travel closed first, followed by restaurants, and cafes; then, tourism collapse completely.

And so in the middle of SARS with no end in sight, the talk was on how long would SARS last and would tourism every come back. Overall the morale in the industry (Travel) was low and talk of “End of Days” was common. 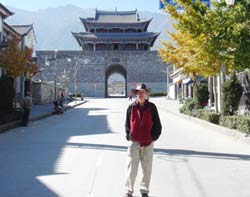 So to encourage a more positive attitude (as I always believed Tourism would bounce back) I said we will produce and develop a Free-map Information Guide and distribute it all over China (and the World) which will help and encourage visitors back to GuiLin.

For once talk was not about SARS but turned into the topic of maps and government control and would it be possible for an individual, let alone a foreigner, to actually publish/print a “Map” in Communist China, as everyone (Chinese) has always been taught that maps in the eyes of the Central Government are considered as National Security Issues.

To this day there still exists a law that states:
“Anyone/company convicted of printing/publishing a map showing sensitive areas can incur a jail sentence of up to 20 years”.

Had we had known this at the time we most likely would have abandoned the whole idea.

Anyway a plan of action was developed where we first contacted some printers who flatly told us it was illegal, not to be discouraged. Next, we approached the GuiLin Tourism Bureau, who were no help at all, even after we explained the goal was to promote and encourage visitors back. In the end, every government Office and officials we contacted either didn’t want to help or were too scared to help, and always referred us to take the matter to NanNing, the Provincial Capital of GuangXi.

As it was, leaving GuiLin was not a problem, since we intended to stay within the province, but the scene was very weird. The whole of China had stopped but all trains (around China) still ran on time and arrived at their intended destinations. On the day we decided to leave we were the only passengers in the whole 12 carriages of that train and of course the staff in their white face masks stayed well clear of us.

NanNing still functioned more or less normally, with less than usual people on the streets. Again with more calls and visits to the same government departments, we eventually got referred to a Government approved and listed Advertising Agency as we intended to include advertisements into our maps.

After explaining our goal and purpose, the Agency suggested we should register with the Publishing & Censorship (Propaganda) Department, within the Commerce and Industrial Bureau’s new 24 storey building in the center of the new CBD area.
Again we presented and explained our project, only to be told that they were only responsible for the editorial and advertisement parts of our publication and because we had a map, we would need the approval of the State Mapping Office, within the Land and Survey Bureau. And without first that approval they could not give their approval, but they could not tell us where their office was located nor their telephone number.

Needless to say eventually we did find their office hidden away in some back alley in a rundown 3 storey 1950’s building. From more than 40 staff it had now shrunk to 2 overworked staff plus their manager.

On entering the office the manager was quickly summoned. And again we explained. At the end he just simply said it was impossible and illegal. Anticipating this reaction I had came prepared with more then 10 printed/published maps and books bought and collected around NanNing and GuiLin as samples and for safe measure some overseas maps as well.

After examining all the samples, he politely informed us that 8 of the Chinese maps/books where illegal and he wanted to keep them for evidence for prosecution against their publishers.

As I did not want to give him my samples, I asked him why they where illegal as some of them where actually published by the local NanNing Government promoting trade and tourism for NanNing. After some interesting debating on how he was going to punish these publishers (later we were told that with all the staff shortages no one had the time to go out and bring the illegal publishers to justice) and what was legal and what was not on the various maps and what constituted a legal map, I finally agreed to let him photocopy the ones he wanted.

I think with all this talk about maps and such I must have convinced him I was not a “spy” after all, as he offered us some tea and asked us to sit down and wait awhile.

On his return he had in his hand a thick blue bible-sized book. Flipping through the pages, he showed it to us and said that it was the “Rules & Regulations that covered everything on maps, the latest edition from BeiJing". In it he started to point out all the things we had discussed earlier, all the dos and donts. And one of the things he also pointed out was that in the whole manual there was no mention or law that stated that an individual or a foreigner could not design or print/publish a map in China. So as far as he was concern as long as I adhered to the guidelines and rules my designs would be approved.

As we were leaving he also gave me the latest maps he had on GuangXi for my references and thankedme for doing the right thing in coming to get his approval and he really thought our project was a good cause to help get things moving again.
After 3 submissions, the 4th was finally approved and permit issued. During the submission period we found out that the manager did actually call the National Lands & Survey Bureau in BeiJing and was told that there was no law that forbid foreigners from designing their own maps.

And so just as SARS came to an end our very first Trax2 Freemap of GuiLin came out. Our print run was a modest 100,000.
Straight after we followed through with our 2nd Publication, the Trax2 YangShuo Freemap, launched to coincide with the 2004 May Day National Holidays. Straight away it was a huge success It was the first FREE Map for YangShuo.

So successful in fact that we appeared in that year’s edition of “The Rough Guide to China” and later appeared in “Frommers” of the U.S. By the end of 2005 we had expanded into YunNan and published our 3rd and 4th Publications; Trax2 DaLi Freemap and Trax2 LiJiang Freemap.

In total we had printed over 300,000 Trax2 maps and distributed them in BeiJing, XiAn, ChengDu, KunMing, Hong Kong and ShangHai.

In 2006, with tourism booming in China and SARS a faint distance memory the Freemaps are also fading away. Through lack of support (lots of our distribution points actual sold our maps with the “FREE” texted out, and in LiJiang a 4 Star Hotel scanned and printed a Trax2 LiJiang Map in its entirety and used it as their own) and government hindrance (the GuiLin Tourism Bureau actually threaten any hotel that displayed our map, and to cap things off www.trax2.com was then been blocked throughout mainland China) and sadly the Trax2 Freemaps come to a end in the following year.

And that is how Trax2 became a Publisher in China and published in 2004 - Trax2 GUILIN - followed closely by Trax2 YANGSHUO. Next year saw the publication of 2 more titles – Trax2 DALI and Trax2 LIJIANG. Following that, Trax2 BeiJing (which in 2007 the IMTA (International Map Trade Association) judged the Trax2 BEIJING – as The Best Designed Sheet Map for that year. Not only that, in the same year, Trax2 new Online China Map site (ZhongGuoLu.com) was also given the Award of Excellence)

With the publishing of Trax2 USA, Trax2 Canada and Trax2 Australia in 2012, Trax2 has now relocated back to Australia.

Free Bilingual Mareeba Map | eMap of Mareeba 马里巴 You will discover more of Mareeba with the first..

8 Essential Amino Acids - True A4 pdf These are the eight essential amino acids that our body cannot..

Free Indian & South Asia eMapThis is the only FREE Indian and South Asia map that has been desig..

Guangzhou markets map | Guangzhou shopping map This map is better than an “app”and with it y..

GuiLin Travel Guide 1 of 4 First in a series of 4 Travel Guides from around the GuiLin area w..

Kunming Map China Trax2 Kunming China is a lot more than just a KunMing Map, with a KunMing City ..

Shanghai China a New 2nd Edition Map of Shanghai Are you aware that a physical map of S..